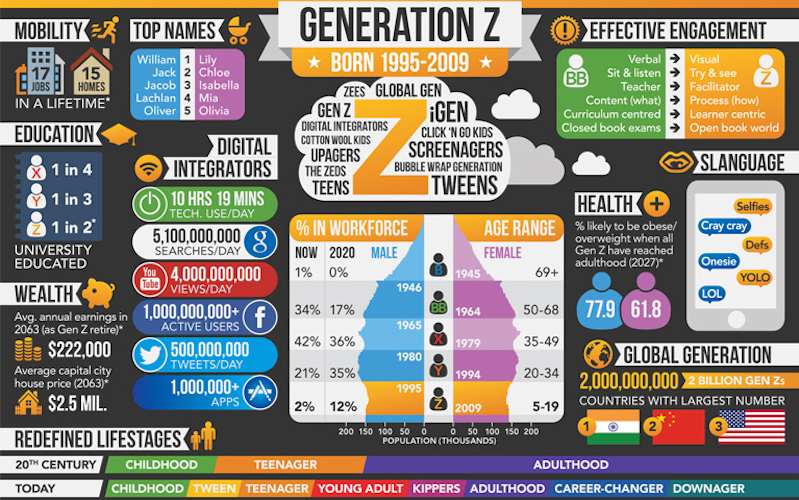 This post was first written in 2010. How accurate was our thinking then? I am interested to hear your comments.

The oldest amongst them are still at school, but already Gen Z is being talked about as a switched on, creative, savvy generation. Born from 1995 onwards, Gen Z will be the most educated cohort of young people to hit the workforce.

The next group of youngsters, some of them still in the cradle, will be far more measured than the Ys and have a strong social conscience.

There is an entire generation indoctrinated about sustainability from the age of five. Bernard Salt, demographer.

While they’ll be incredibly proficient with technology and globally connected, they’re likely to be less cavalier than the Ys who grew up through 16 years of economic highs. The Zs will go into the workforce over the next decade which is the time that we are recovering from the global financial crisis, which will cast a shadow on the business psyche for many years after it has been resolved [Salt].

Once the Ys take on mortgages and kids, and are forced to settle down, it will be the Zs flitting from job to job in their 20’s, moving around the world and sampling life and work in bite-sized chunks. Business thought leader Peter Sheahan believes the group will be hugely creative and will be super-sophisticated problem solvers.

I think that they are going to be phenomenal talent. Sheahan

Much of this ability will have been developed online through the technologies that are available and emerging.

However there is an opposite view – some believe tho that Generation Z is being raised by helicopter parents, ready to fly in at a moment’s notice and solve their child’s problems. This could lead to a group of young people less able to look after themselves or resolve problems.

from HR Monthly, AHRI with some adaption